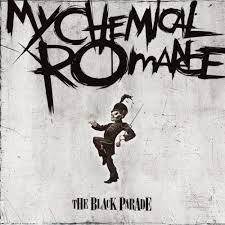 10 years ago yesterday, October 23rd 2006, My Chemical Romance began a chapter in their band’s story that would go on to define a generation of sub culture. The Black Parade is widely considered to be the most iconic emo albums of its time and remains influential in the hearts of fans and musicians today.  Music which is so purely emotionally driven combined with a fan base who widely seek support through their favourite bands meant for the kind of success that nobody could have predicted.
Being in the format of a rock opera makes The Black Paradea hugely conceptual album. It follows the story of a cancer patient looking back through his life in his final moments, a harrowing start, but one which lead to a huge creative leap. The costumes, tour and music videos all created what became a well-known iconography and enhanced the listeners understanding of the songs. It was striking, unashamedly dramatic but provided certain rawness by throwing out the idea that there could be a contentment, near pride, in being somewhat damaged.

On the surface, almost all of the songs are based on sadness or a form of self-loathing. It’s easy to see how much negative attention shrouded the band in the eyes of some audiences, when seemingly they glorify a depreciation of life. But for those who considered the music and took the time to get to know it, the songs became a comfort, a source of understanding or release. For the most devoted of fans it became the soundtrack to an integral chapter in their lives.

I know this because I cannot deny being one of those fans;  I am proud to say I listened to that album until I knew it inside out, that I have queued for hours to be on the barrier at their concerts, that for a while their music was all that I really cared about. I am not alone in this, which I know through all of the people I have met sat on cold London streets in the early hours of the morning queuing for their concerts. Friends who even now travel the world to see the band members perform in their solo projects. It became a cliché to say that ‘MCR saved my life.’, and rightly so I believe, however there is no question that for many fans there is some kind of a truth in the statement.

There’s something magical in a band that can emotionally connect with such a wide group of people. I think the truest example of this comes from the closing song on the album Famous Last Words. I’ve heard it on the radio, on CD, on the original vinyl pressing of the album and the 10th anniversary reissue. At it’s loudest I’ve heard the crowd at a Reading Festival headline slot scream out from the top of their lungs.
“I am not afraid to keep on living, I am not afraid to walk this world alone.”
It’s that message that keeps My Chemical Romance so valued and what made them so important. Through all that darkness and confusion there is always a light, always a drive. It was never about being knocked down, it was about gritting your teeth, getting up and carrying on.